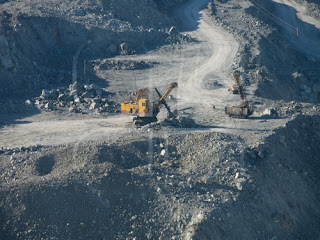 The grey jaws of Asbest open wide.
Mile after mile slave miners
Tunnel deep, before dawn breaks,
Long after dusk. Caverns echo
With the tell tale coughs, racking
Their bodies until they drop.
No one notes how many die.
Journey’s conclusion, the end of the line,
The trains disgorge direct into the mines.
A mother’s nimble fingers, and nimbleness
Of mind, a fluency in Russian, a fluency
In lying, a shortage of skilled workers,
The tumblers fall in line. A mother and
Her daughters set to work not
With picks and shovels,
But with thimble, needle, threads,
Fashioning uniforms for the Reds.
Better raw hands than raw lungs
Perishing inside.
71 years later my son played for Wales in the Chess Olympiad in Khantiy Mansisk. He was just fifty kilometres away from the place where his grandmother cheated death.
Posted by REJ GOCH at 4:06 AM