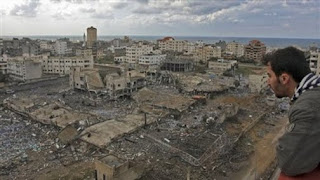 I cannot speak of it.
My mouth is stopped.
A finger pressed a button.
A bomb dropped.
White phosphorous lit up the place,
which used to be our home.
The flesh fell from my face.
My bones reduced to dust,
inseparable from stones,
blood boiled black as rust..
No cameras rushed here to record.
This grave is unremarkable.
Of what happened here, not one word
was written. No testimony was heard.
Just another day in this prison city.
Nothing extraordinary occurred.
Tomorrow, the bomber will return.
The button will be pushed again.
Someone else’s turn to burn.
They too will have no voice,
unless you choose to speak for us.
The time has come to make your choice.
The last two poems should be read as a pair. They are not mutually exclusive, but‘Silence’ is a counterweight to the understandable emotions of a 9/11 relative in ‘Denial‘. It is a human response with which we empathise. The tragedy is that in terms of public awareness, Gaza barely registers on the public psyche and ‘Silence’ sets out to put this right.
Posted by REJ GOCH at 11:01 AM