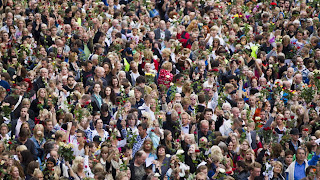 He wants to wear a uniform.
Make him stand naked in the dock.
He wants the world to know his face.
Fix an iron mask in its place.
He wants you to remember his name.
Give him a number instead.
He wants the spotlight of celebrity.
Pin him with the searchlight of infamy.
He wants the oxygen of publicity.
Give him the Zyklon B of anonymity.
He wants to explain what he did.
Give him four blank walls to talk to.
He wishes to be considered unique.
Solitary then, one cell, one freak.
And should he tire one day and beg a lethal drink,
Offer him water and even more time to think.
For him no gruesome martyr’s shrine,
Ashes cast among the ignorant swine.
You cannot debate with a man carrying a semi-automatic.
Posted by REJ GOCH at 1:54 AM