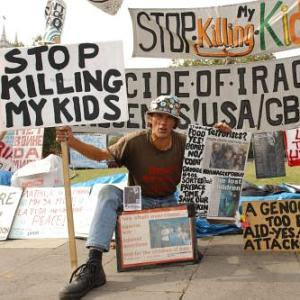 He did not die. He is not dead.
The words written on his banners
Ring round and round our heads.
Iraq, Libya, Afghanistan,
Raise your voices whenever you can,
Two million strong, or just one man.
Bloody minded, awkward cuss,
Patron saint of making fuss,
He stood for the best in us.
Bombs and children do not mix.
Landmines maim. Napalm sticks.
Dealing in arms just makes you sick.
He dragged our conscience to the Square.
Against all odds, he kept it there,
Fluttering bravely in the cold night air.
All hacks agreed, the camp an eyesore.
He kept adding more and more
Reasons for resisting war.
The antithesis of liar,
Bedraggled nemesis of Bliar,
Not for sale, nor for hire!
Occupation? General strike?
His is what democracy looks like.
Brian Haw, people’s mike.
Through wind and rain,
Through storms of pain,
He stood strong, again and again.
Though tyrants rule and streets run red,
We will follow where he has lead.
He did not die. He is not dead.
Living on the very edge is doing wonders for my creative imagination!
Posted by REJ GOCH at 3:46 AM