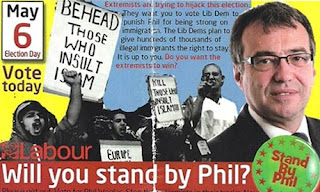 Politics, they explain, is a contact sport,
so gouge and stamp without a thought.
All's fair in electioneering or war.
All that counts is the final score
and should you win, you get to write
the history, avoiding everything that might
embarrass, or cast doubt
on the part you played throughout.

Unfortunate that racist defamation,
though, for a while, it served to keep you at your station,
when the lies fluttered home to roost,
you found your own neck in the noose.
It was you who ruined your own reputation.
The lies you printed were your own creation.
If politics is a contact sport,
then you've been K.O'd. as you ought.

The honour for landing the first blow has to go to Joanna Lumley and it obviously scrambled Woolas's head, because he thought he was standing for the BNP in the last election. Harriet Harman was quite right to dump him. There should be no place for anyone like him in the Labour Party and as for those who are 'rallying' to support their 'friend', they'd be better off joining him on the dole where they can all spend some time litter picking ( gathering up spent election leaflets for a start! )
Posted by REJ GOCH at 3:40 AM