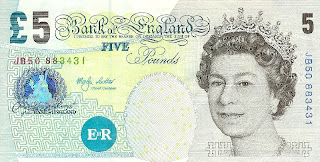 Unusually a preamble to the poem. Our writing group was set the task of telling the story of a five pound note as it passed from
one person to the next and this is what popped into my head ....

Clean, unlaundered, quite pristine
straight from the jaws of the cash machine,
folded safely into the recesses of my purse,
money may be a sin, but want of it is worse.

The plumber wanted cash in hand,
finished the work three weeks later than planned.
Won't find a cheaper job, he promised with a wink.
By Friday I stood cursing the same old blocked up sink.

One of many, in a brown envelope, safely out of sight,
tucked in the planning officer's back pocket, snug and tight.
He felt it with every buttock clench,
the next day, sat in judgement, on the magistrates' bench

She took the money up front with a smile,
tucked it provocatively into her bra while
he started to remove his shoes and socks
and she made ready her chains and locks.

In an evidence bag smeared with dark stains
and in one corner a splinter of her brains.
She could not understand her pimp would never agree
that there are any circumstances when love is truly free.
Posted by REJ GOCH at 3:25 AM