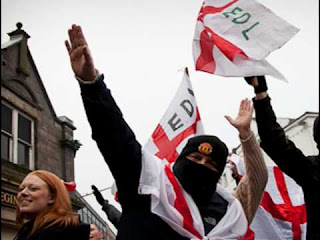 He’s a little man,
but when he’s hidden in a crowd,
he feels ten feet tall,
powerful and proud.

He’d never take you on
one to one in a fight,
but if he’s part of a gang,
watch your back, right?

He’s part of a column,
though he can’t add 8 and 8.
his life is consumed
by loathing and hate.

He’s a work-shy little shit,
but if he can put the blame
on anyone else
that makes sense, doesn’t it?

He’s a tool in the hands
of would be dictators,
blunt instrument once used
disposable, deniable later.

They did not pass in Bradford. Not enough people understand that fascists have to be confronted physically, before they can do any damage. It will be too late to defend beleaguered communities if they are given a free hand to run riot. Wherever they are active, the incidence of racist crime multiplies like nowhere else.
Posted by REJ GOCH at 11:34 AM No comments: 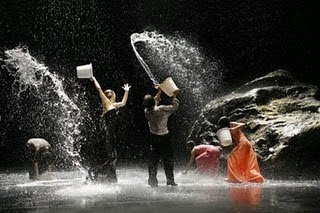 A blank white canvass blossoms into vibrant rainforest the forest bursts into life birds become men trees fashion themselves into limbs their roots burrow deep inside where dark rhythms pulse the heart of the Amazon drumming in my head soothed by butterfly wing washed clean by torrents drenched in the passion of dance.


Later I found myself
wandering the streets
of the manic city,
oblivious, floating,
in a trance.

This came to me during and after watching a performance of ‘Água’ by the Tanztheater, Wuppertal. I am not a fan of modern dance. I had never even heard of Pina Bausch, but as far as my few days at the Edinburgh Festival were concerned this was the WOW! Moment and words are simply not enough.
Posted by REJ GOCH at 9:45 AM No comments:

An American poet at the Bookfest 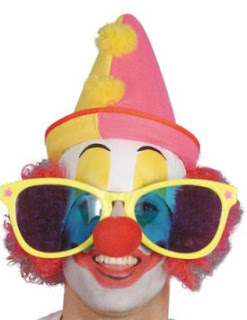 It’s over now, so why look back.
We won that war didn’t we.
I’ve already forgotten all I learned about Iraq.
The war on terror I understand.
We’ve go to stand strong, but
Where the fuck’s Afghanistan?
Don’t ask me. That’s a place I will not go,
A book kept closed, along with rendition and Guantanamo.

Here in my champagne bubble’s the place I like best.
For all the rest, I couldn’t care less.
The sound of my voice, the feel of your thigh,
Life’s so simple, no need to ask why.

Apologies to all the good American poets! It was just my like to find this one!
Posted by REJ GOCH at 9:45 AM 1 comment: 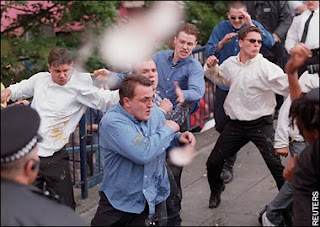 Law?
You're having a laugh.
Coppers?
Two a penny.
Neighbours?
It's them or us.
Justice?
He ain't getting any!

From Wikipedia
Stephen Lawrence was murdered in 1993. On 14 February 1997, the Daily Mail newspaper labelled all five of those believed to have attacked and killed Lawrence "murderers", challenging them to sue the newspaper for libel if they were wrong. The headline read "Murderers: The Mail accuses these men of killing. If we are wrong, let them sue us." Underneath this headline appeared pictures of Gary Dobson, Neil Acourt, Jamie Acourt, Luke Knight, and David Norris. In 2002, two men accused in the Lawrence case, David Norris and Neil Acourt, were convicted and jailed for a racist attack on a plainclothes black police officer.
In July 2010, Gary Dobson was jailed for five years for dealing in drugs.
No one has been convicted of Stephen Lawrence's murder. The suspected killers, all but one now possessing additional police records, are at large and detailed on the Mail website.


This grim poem was the product of a sleepless night, probably because I would have to admit to the Daily Mail doing something good!
Posted by REJ GOCH at 5:17 AM 1 comment: 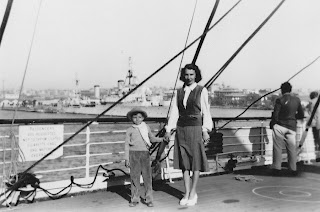 This is Malindi,
the mystery of salt on my tongue,
toes curling in the surf,
scanning the horizon
for sharks.

This is Suez,
perched on a life-raft,
the better to absorb
the rising perfume of fresh leather,
chaos of colour and sound
from feluccas clustered all around.

This is Genova,
sleek destroyers anchored
idle now, but restless.
Mother, not nine years
out of Stalin's camps,
still thin and wary,
teetering on the edge of exile,
keeps me wrapped up warm
against the cold to come.

This is Biscay,
sneaking on deck
for a last game of quoits,
rolling with the grey swell,
ice in my eyes.

This is Tilbury,
the disappointment of dry land,
made softer by the first feeling
of snow on my unsuspecting cheek.

This is Blackpool,
chip wrappers hurtling
round the Pleasure Beach,
overloaded, braying donkeys,
gritty ice cream,
broken lights tinkling,
as I ride the Rockets
on my own.

This is the Haven,
two pairs of footprints
traced in sand and coal dust.

This is the road to Treshnish,
suspended in glass,
rafts of puffin everywhere,
Great Black Backs balanced
on thin air.

This the riding of the Wyrm,
heads haloed by the setting sun,
spray sheets wound
ever more tightly round.

This is the liner Mavi Marmara,
pressing against the tide,
decks slick with blood,
sharks circling.
My life is at the flood.
I hear the call of the sea again,
a rhythmic pulsing deep inside. 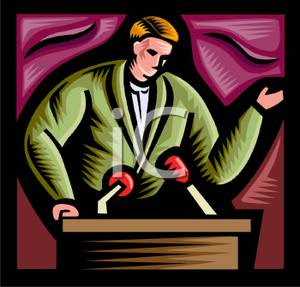 I
Poetry abhors a vacuum,
so wise old poets say.
Who gives a fig for wisdom?
I'll do it my way.
Sit still and listen
as my consciousness just flows.
Half an hour later,
as emerging from a dream,
ask yourself the question,
what did it all mean?

II
Anything you can say
I can shout louder,
louder than anything
you throw my way.
See how I thunder.
See how I curse.
My words make no sense, but
they do not lack force.

III
Pretty, prissy poesie
tripping down the line,
all one with Nature.
Such harmony of mind
and body and spirit
is so very rare to find
in one so impossibly young,
so talented, so blind.

V
I am the rebel poet,
with a pint glass in my hand.
Cursed be all convention!
Conformity be damned!

I am the rebel poet.
My metre's in my fist.
Death to the Establishment!
It's my arse they should kiss!

I am the rebel poet.
I'm the one to watch.
I see you heading for the bar.
Make mine a double scotch.

I enjoy open mike nights, but if you can't take the piss out of yourselves .....
The last line of the fourth stanza is not a misprint just a subtlety that anyone from Swonzee might recognise! Picked up the image on the internet. Not sure whose it is and I hope they don't mind me using it. It fits so well.
Posted by REJ GOCH at 7:02 AM No comments:

The Song of the Whistleblowers 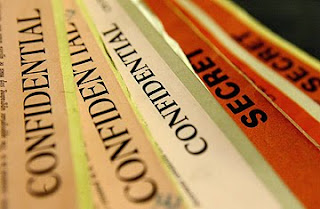 Look, he shouted, stop him now!
That banker's a thief!
That got him labelled a red,
whose protests were beyond belief.

Look, he pointed, it's obvious,
that copper's both violent and bent.
Since he spoke those words, his life
in a cell in Broadmoor's been spent.

Look, he swore, waving a fist in the air,
this judge just toes the government line.
That earned him an extra long sentence
on top of a crippling great fine.

Look, he reported, the records reveal
the Minister's drowning in graft.
They opened up the mines again,
dropped his body straight down a shaft.

Look, he begged, any fool can see
the Bishop's spouting lies.
They burned him at the stake
after plucking out both of his eyes.

Look, he explained, can't you read,
the press baron's a conman, a liar,
so the media ripped his tongue out,
then destroyed all his words on a fire.

Look, he warned, the writing's on the wall.
America's careering out of control.
They sent him to Guantanamo
to rot in their darkest hole.

Look, he wrote, in his big black book,
this poet's too scared to speak
and was condemned out of hand
as a crackpot, an illiterate freak.

Look, he laughed, can't you see
the Emperor's body is bare.
Now, if you search all public records,
you'll not find a trace of him  - anywhere.

Well done Wikileaks!
Posted by REJ GOCH at 6:52 AM No comments:

13 Ways of Looking at a Cruise Missile 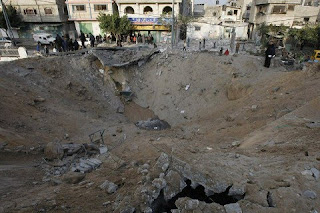 i
The germ of an idea,
intelligent destruction,
blue print in some mind’s eye.
ii
Fruition, intricate,
delicate circuitry,
the act of creation.

iii
See how metals bends
to my will.
See how I shape the wind.

vi
Slipping out of the Stealth's belly,
erupting like a fountain
out of sea-shadow.

viii
Video screen. Your target?
That impersonal concrete block.
Track the missile all the way to snow.

ix
The trembling air,
the collapsing walls,
the suffocating tomb.

xiii
A hand growing
out of the rubble.
The last breath spiralling
out of reach.

The starting point for this poem was Wallace Stevens' '13 Ways of Looking at a Blackbird', a great piece of work which has been parodied in many different contexts, but I suspect, none so harsh as this.
Posted by REJ GOCH at 2:39 PM No comments: