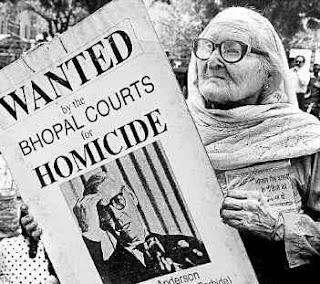 The president is as angry as angry can be.
Pollution is spreading all over the sea.
It's not due to Exxon, it's down to BP.
He's calling for justice and full reparation.
He's spreading his message across the whole nation.

But wait, there's a memory stirring in me.
There's something familiar in those letters, you see,
A name with a B and also a P,
The name of a place that reminds me of hell,
Thirty six years dead and I can still smell
Those bodies all burning inside,
The thousands of victims of Union Carbide.
You'll know now, for sure, what those letters spell,
B - H - O - P - A - L.

I can take you back, it's all still there,
Ruined factory, poisoned earth, venomous air,
Black, black water in every well
And now you can go back home and tell
Of deformed limbs on every street,
Of the blind and the mad who you had to meet.
Yes, tell all the guilty, who got off scot free,
Safe in their mansions, where no one can see,
The compensation per person was just 30p.

Of course BP should pay for what it has done, but let's not be selective. What goes for BP goes for everybody else and certainly for American companies who dodge behind the protection of an all powerful state. Governments too should be called to account for giving the multi-nationals free rein to plunder and spoil.
Posted by REJ GOCH at 8:17 AM