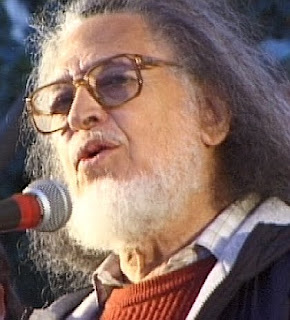 Never knew the man,
Just another exile named,
Whose solitary flame kept burning
So still they could not silence him.

Heard that story,
How, held prisoner once,
He seized his only chance.
A guard looked sly, the other way,
Then turned and fired one shot.
He lay dead still,
But no mere bullet in the back
Could silence him.

Shielded by bullet-proof plate glass,
Anglo American office workers paused
To stare at his body, lake of blood,
Couldn’t care less cops hanging about
Waiting for a “blacks only” ambulance
To cart the day’s refuse out of sight,
Then back to work, business as usual,
But still indifference
Could not silence him.

Rest cure on Robben Island.
In the neighbouring cell smouldered
Another name, branded
Mandela on all our minds.
Together, they could not silence them.

Swansea, Saturday on the Mumbles Road,
At the gates of St. Helen’s,
Or even trampling the sacred turf,
A mighty rucking
Of police, ‘sports fans’, vigilantes,
Beneath the freshly daubed walls,
His words, BAN THE BOKS
Echoing round the world
So surely could they not silence him.

Offered his name in gold
He shunned such place in history
And never would his name
Be chiselled in the same stone as our oppressors,
Nor will apartheid
Rear up in different lands
Without that voice being heard again.
From Sharpeville to Jenin,
From Soweto to Jibaliyah,
We will rise up and they will hear
And understand that never will they silence us.

My friend, Dave Jardine, e mailed me from Djakarta
with Dennis Brutus’s obituary from The Guardian
and reminded me how he and a group of students
from Swansea travelled to Cardiff in 1969 to hear Dennis
Brutus speak. That group became the core of those
who organised the demonstration against the
Springboks rugby team’s match against Swansea.
The match was disrupted by a pitch invasion lasting
some 20 minutes. The extreme violence used
against protestors was shown on TV all around the
world. Outside the ground it was no better with a
2 hour battle to defend against constant police attacks.
It was the beginning of the end of apartheid sport in
Britain.
Posted by REJ GOCH at 2:07 PM