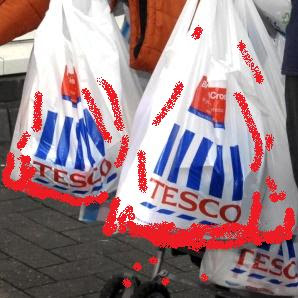 All police leave has been cancelled.
The armed response unit is on standby.
Loudspeaker vans are touring the neighbourhoods
Warning law abiding citizens to watch out -
Tesco deals in stolen goods!

Warrants have been issued.
Evidence gathered for public display
That with no regard for people’s livelihoods
No shred of human decency
Tesco deals in stolen goods!

The learned judge is dusting off his wig.
Barristers rehearse complex argument.
You’d surely do anything you could
To uphold our laws and stop
Tesco selling stolen goods!

I must be dreaming, or suffering from shock
The wrong person is standing in the dock.
Instead of profiteers from theft, murder, falsehoods
The honest citizen is charged, while
Tesco carry on selling stolen goods.

Surely now justice must prevail
Twelve jurors must not fail
To send a message that is understood
One law for all is what we’re fighting for so
Punish Tesco for selling stolen goods!

The Tesco 2, Dee Murphy and Greg Wilkinson went into Tesco and filled up their trolleys with goods labelled as ‘Produce of the West Bank’, in reality produced by the illegal Israeli settlements which have driven Palestinians, at gunpoint, from their own lands. They then walked out of the store, tipped the trolleys up and waited to be arrested. Dee has been charged. Greg has not, even though he stood up in court and demanded to be arrested, as he had done exactly what she had done. He was ejected from court for his pains. Trial pending. Let’s hear it for the Tesco 2 turning words into action!
Posted by REJ GOCH at 8:34 AM