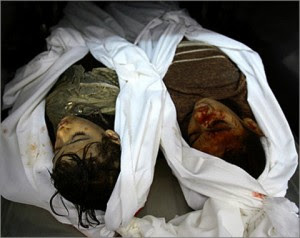 Nothing was left to chance.
Look at these close up satellite images.
A pilotless drone filmed the whole scene
As it circled lazily above the road.
Trained military spotters watched every moment
From the safety of bunkers just across the border.

There could be no mistake.
The donkey cart was in plain view.
It was clearly a suspicious animal
With furtive ears. It even looked nervous.
Nobody was fooled by the two little sisters
Tagging along for the ride, there to give cover,
As guilty as the flea-bitten creature itself.

And so the brave soldiers called the F16 in.
The pilot waved, gave his usual cheeky chappy grin,
Then released the GBU - 39,
The kind of intelligent bomb
You can land on the head of a pin.
Have no fear.
There was no pilot error here.

The tabloid editor downed his whisky, still smoking -
A girl of four and her eleven year old sister
Killed searching for food -
An ‘unfortunate accident’,
No interest to our kind of reader.
Forget all about it.
Drop the dead donkey.
A front page story? You must be joking!

This comes from reading Kawther Salam’s account on Palestine Think Tank and the following “The nation of Israel is pure and the Arabs are a nation of donkeys.” Rabbi David Batzri, head of the Magen David Yeshiva in Jerusalem, quoted in the Haaretz, March 21st 2006.
Posted by REJ GOCH at 7:27 AM