In Praise of Footwear 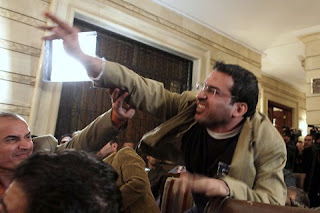 Today, Muntazer Al-Zaidi
Put the finishing touches
To the President’s monument,
A memorial to his shame,
For one who yearned for glory
No matter what the cost,
For one who lived
With one foot in his mouth,
Whose mis-speaking spread fear
North, west, east and south,
Whose eyes could never keep still
In their search for someone else to blame,
A man ignorant of the graves he left
Wherever he stamped his name,
Oblivious to the wards of limbless
And the broken families left behind.
So what should we do to remember
This proud leader of men who chose to be blind?

Quite soon he’ll come a calling
On a lucrative lecture tour.
Don’t fret with placards, slogans or boos.
If you want to rain on his parade
Don’t dignify him with a bullet or grenade,
Just shower the ex-president with shoes.

Full of flu. This poem has been boiling up since I saw Muntazer on the news.
Posted by REJ GOCH at 9:33 AM