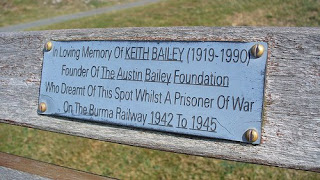 I found him sitting on his bench.
Overhead, a kestrel hung in the air,
Watching the limestone’s slants
Into the slate black water.
Wings flickered
In the corners of his eyes.
Likewise the giddy choughs
Playing tag across the skies.
Yet his head was like a rock
And I wondered why
He did not turn like me
To follow every pirouette and dive.

Those unseeing eyes were hidden
Behind a hedge of bayonets.
He smelled not brine, but sour sweat.
Instead of screeching gulls
The air was full of curses,
Wrapped in sheets of steaming rain
And bound in an eternity of pain.

Here was his own space
Where his comrade, the sea, spoke not.
A friend deaf to order,
A last companion,
Lost for words.

This poem was born of a walk from Langland Bay with Paul Morgan, Alan Figg and Lou Bowyer. Not being fully recovered, I did not venture down into Caswell, thinking I could not cope with the climb back and so I made my way back slowly whilst the Musketeers completed the walk. It was then that I found a bench overlooking the sea with the above inscription.….
Posted by REJ GOCH at 5:45 AM