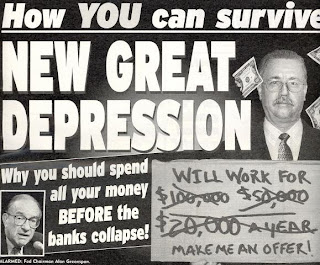 Give yourself a good talking to....

Pull yourself together.
It can’t get any worse.
Your money’s gone to Iceland.
There’s nothing in your purse.

A mortgage made in heaven,
Ten times your earning power.
They must have seen you coming.
Too late to curse and glower.

Can’t say I didn’t warn you
You were heading for a fall.
Now it’s now use hiding
When the bailiff comes to call.

You saw the storm clouds forming,
But you hung the washing out,
So don’t complain, as you watch the rain
And your life goes down the spout.

See that fat cat grinning,
As he heads off for the sun
Who pays for his life of luxury?
You guessed it. You’re the one.

In a system based on profit/greed
Instead of meeting simple needs,
It’s folk at the bottom who bear all the pains,
Whilst the scum at the top escape with their gains.

By popular request and especially after I read about Sir Fred Goodwin, now ex Chief Executive of the Royal Bank of Scotland, who earned only £4.1 million last year, including a £2.86 million 'bonus'. He generously waived his 'right' to a £1.2 million severance payment, but for some reason he keeps his annual pension of £579,000. I can't detail all the others in the same position, because it just makes me sick!
Posted by REJ GOCH at 4:04 AM