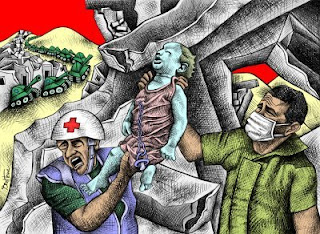 Safe in your sister’s arms,
Shielded from the blistering heat,
Safe in your mother’s embrace
At one with the rhythm of her breath,
Safe from the random bullet,
The stray delivery of death,
Safe in a womb of your own,
Out of sight of the pilot above,
Safe here, where miracles are made,
Where water turns to wine, as an act of love,
Safe because of your innocence,
Safe because you are only a child.

This ten second news story,
This modern parable,
What lessons does it hold?
My fingers splintered on rubble.
My blood ran cold,
As the last stone moved,
Revealed the first disfigured limb
And I knew the colours of her dress,
Recognised the pattern, doves on a dusty hem.

This comes from Robert Fisk’s account of the bombing of Qana in southern Lebanon. 56 innocent civilians were killed, victims of Israeli ‘precision’ bombing. 34 were children. The sub-heading refers to the markings found on a fragment of the bomb that slaughtered them. I don’t know whether to thank Robert or to curse him. He reveals so much that others would prefer to remain hidden, but it also means I can’t sleep at night and I haven’t even seen these horrors for myself. I don’t know how he can return, time and time again, often risking his own life, to the scene of one massacre after another. I don’t understand how he himself can sleep, having seen what he has seen. Qana is reputed to be the biblical Cana. Welcome to Bangladesh! I have replaced the image I originally chose with the Ben Heine cartoon that was added on Palestine Think Tank thanks to Mary Rizzo.
A BIG WELCOME TO MY BROTHERS IN PALESTINE.
Posted by REJ GOCH at 6:30 AM