The Assassination of Fadel Shana 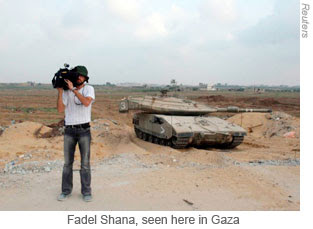 Painted on its side was a Star of David,
Which made it God’s chosen tank,
Impervious to criticism, omnipotent,
Invincible in the face of stone throwing kids.

The turret rotated and the muzzle,
Like a baleful Cyclops eyed its prey,
A four by four parked
A few hundred yards away,

An obvious target,
Marked with letters three feet high –
‘TV/PRESS’ – an obvious invitation to open fire –
After all, it’s open season on those who ask why?

And so the long barrel coughed once,
The rabbinical shell spun on its way,
Determined to have the final say,
Ripped the back of the car right off,

Splintered into flechettes,
Inch long darts, which sliced
Through his flak jacket, as if through chaff,
Cut his puny spine in half.

Two seconds after a puff of dust
Marked the moment of the shot,
His images gave way to static
At the moment his great heart burst.

An Israeli military official said, "We wish to express sorrow for the death of the Palestinian cameraman ... It should be emphasized that the area in which the cameraman was injured is an area in which ongoing fighting against armed, extreme and dangerous terrorist organizations occurs on a daily basis. "The presence of media, photographers and other uninvolved individuals in areas of warfare is extremely dangerous and poses a threat to their lives."

After 2 weeks in hospital, weeks without news, I see that nothing has changed and so I return to the fray.
Posted by REJ GOCH at 12:22 PM