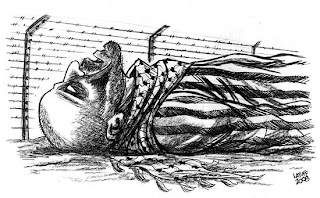 Time for confessions ….
Were you the one
Who formed the weasel words?
Were you amongst the sheep
Who voted for this ‘law’?
Is this what you voted for?
Were you the one
Who signed her death warrant?
Were you one of the immigration cops
Who dragged her onto the flight,
Muttering, “ I was only
Carrying out orders. Somebody else
Would have done it if I had not.”

This how a Holocaust begins,
You watch, disconnected
As they take one defenceless black woman
From a cancer ward,
Give no thought to her fate,
For though she has countless friends,
The money needed will come together too late,
She’ll be too exhausted to fight on,
Knowing that for justice she’d have to wait
Until the oceans froze and the skies wept blood,
Long after she’d been murdered by the state.
Who’s will be the next name to be chalked up on your gory slate?

What has Latuff's cartoon got to do with the poem that follows? I am making a point here. This is the same fight and we are dealing with the same enemy.
Posted by REJ GOCH at 3:43 AM