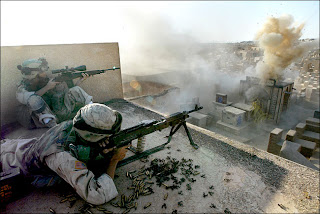 We were killing time when the Americans came back
That dazed morning, sunlight guttering outside
The slaughterhouse. Inside the half-track
They would have heard our futile muttering
Of prayers, then heard the whispers cease,
Give place to our lungs’ urgent pleading,
Long since driven to our knees,
Before one shot was fired, already bleeding.
Two lines of shadow deployed across the street,
No IEDs to snag their careless feet.
A Black Hawk hovered overhead.
GIs lined up eyes like gun sights,
Eyes blank with the terror of long nights,
Scoping both the living and half dead,
Sun scarred hands and arms made
For farmers, now each preparing one grenade.

Heaney’s original is ‘Anahorish 1944’ p7 in ‘District and Circle’ published by Faber & Faber 2006. The picture is of US troops engaged in a fire fight in a cemetery in An Najaf. A spokesman later claimed that when it was over 'many dead enemy combatants were discovered in the area'.
Posted by REJ GOCH at 3:18 AM