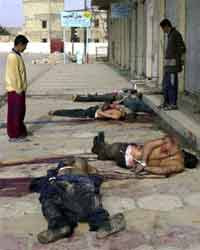 Wake up! The war is over.
Peel your fingers from your ears.
There’s no more need to cover
Your eyes. See, the smoke has cleared.

Outside your window, the street is bare
Of soldiers. Even the sniper lurks no more,
No sign of your father’s killer anywhere.
He’s safe in the US, minding the local store.

No more unexploded shells in the square
Of a garden, only a row of untidy graves,
Your brother and two sisters lie there,
While a lost uncle chews his fists and raves,

Where Mother once searched for remains
Until the depleted uranium took firm hold
And she joined her family near the drains
Before you had time to wake and grow old.

There’s no need to cry. Can’t you see
Where once terror stalked your land,
Where once crooks and profiteers
Swarmed over oil polluted sand,
There’s a kind of silence now
and a new model of democracy?

Just heard some Brit neo con raving on about how nuclear weapons had kept the peace for over 50 years. What do they take so early in the day? Pic taken on the streets of Baghdad.
Posted by REJ GOCH at 10:15 AM