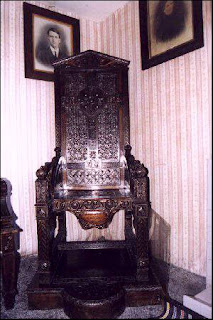 In the depths of our despair,
God is nowhere to be found
And men go hurtling in his wake,
Take on the hideous mantles of tyrant kings.

As God steals away,
Brother wields murderous sword against brother.
The syllables of slaughter fill our ears.
Death’s shadow swarms over the land.

The harps of old, the ones that used to sing,
Hang, choke on the branches of weeping trees.
The hot wind swells with the screams of our abandoned sons.
Sand commingles with their blood.

This is a radical re-working of a translation into English
of the prize winning poem by Hedd Wyn. No translation
into any language can match original rhythms and nuances.
This is especially true of translations from Welsh, but I have
gone beyond literal translation and its alternative, the attempt
to catch the essence of the original in a new form. Instead, I
have overturned the religious overtones of Ellis Evans’ poem
and introduced contemporary resonances whilst at the same
time relying heavily on much of Evans’ own imagery.
The original, in Welsh, is given after this and I would be
interested to discover what Welsh speakers might make
of the liberties I have taken. More of ‘The Black Chair’ is to
come, together with some history of the poet who set me off
on this track.