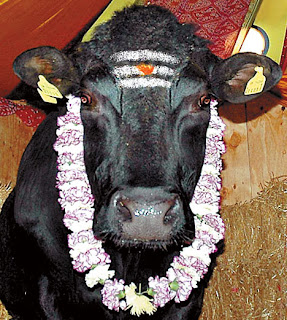 Lord hear me.
Have mercy
on those honest farmers.

You might think this a strange poem to come from
the pen of an atheist, but it seemed too good a chance
to observe some of the ironies involved in this story
and to put it bluntly I just got pissed off at the queues
of farmers at the Royal Welsh Show, all keen to share
their misery with the Skanda Vale Community and
mock the idea of a bullock as sacred?. Is
that any stranger than wearing a celice under your
skirt and trotting off once a week to taste the flesh and
drink the blood of the Son of God? Is it any crazier than
believing that a former member of the Hitler Youth is
infallible? Is it more harmful than forcing Palestinians
from their land, then starving them to death with your
only justification that you belong to God’s chosen
people? Is it as ‘uncivilised’ as stoning adultresses to death,
or cutting the hands from common thieves?
Posted by REJ GOCH at 9:22 AM