The White Stork of Glais 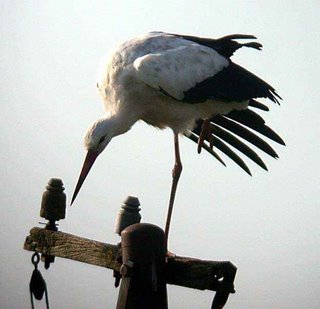 I chose to rest high above the river,
near a solid stone bridge, for just one day,
to watch the frantic sewin leap, quiver
in the air, then melt into freezing spray,

watery spirits, tricks of passing light,
defying the shadows of speeding cars
relentless heralds of the coming night,
and ignorant of the presence of stars.

They too are watching, gathered down below,
the curiously disconnected men.
If they could only see the things I know
they’d leave this place and never come again

I have seen silver rivers burning dry.
I have witnessed the bleaching of their sky.

At the end of last summer, a solitary European White Stork appeared in our village and settled on a lamppost overlooking the by-pass. This was the first sighting of a White Stork in Wales for over 100 years. The image is taken from http://www.birder.pwp.blueyonder.co.uk/WhiteStork%20(1).jpg