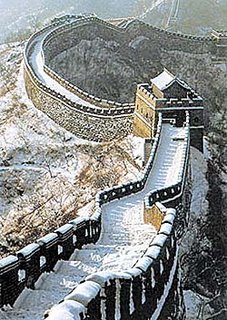 2. The Great Wall of China

Seen from outer space,
it looks like an unhealed scar
on the face of the planet.
Hardly what the builders intended
from their limited perspective
at ground level,
in their frenzy to oblige, construct
a symbol of unassailable might.

Now as much use
as that buried terracotta army,
row on row of obedient warriors
with no Mongols in sight,
apart from the relentless hordes,
drunk on an Emperor’s delusions
of grandeur, complaining
about foreign food,
brooding about another long flight,
trying to look intelligent
not over awed.

This poem is for Keith Ross, De Murphy and Bob Cotterill who occupied the keep of Cardiff Castle yesterday to protest at the treatment of Palestinians and have since been arrested. Will update on this when I know more.
Posted by REJ GOCH at 7:14 AM