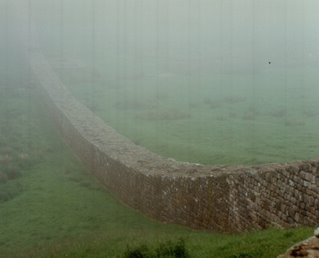 Watched over by windswept raven and hooded crow,
a dead snake stretched out across misted hills,
the final frontier in that cold, old war
to stem the heathen terror from the north,
its name cursed by stranded legions, not worth
one sisterce in the greater scheme of things.

Skilfully preserved now for the edification
of another confused and misled generation,
but will we understand what the wind sings
and who would wish to share the fate
of that last guard tied to his post
with blue faces gathering by the gate?

Apologies for the break in transmission, but life has been crowding in on poetry. This poem is the first in a cycle of six all with the general heading 'Walls'. The image is taken from http://www.gorge.org/images/hadrian/5wall.jpg