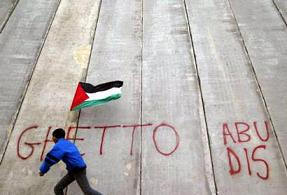 5. The Wall of Hate
Blunt instrument in the hands of thugs,
self anointed concentration camp guards,
who misunderstand the message of the broken shards
of glass and cries of Jüden Raus!
and gather at the Wailing Wall,
so that we might witness, one and all,
how false contrition comes before the fall.
They fear an enemy without,
These concrete slabs a last redoubt,
with death and hunger on the other side,
but all the time, as dark as sin,
the enemy strikes from deep within,
a cancerous growth that cannot be denied.
You’d think the victors of Jericho,
would surely understand, must know
that towering walls offer no protection
to a people mired in self deception.
Long after an evil empire falls,
its history lies revealed, in fallen walls.
I see today that when the Israeli's threatened an air strike against the home of a Palestinian militant, his whole community offered itself as a human shield to stop them. From people who have nothing, expect the highest forms of self sacrifice!
Posted by REJ GOCH at 7:53 AM