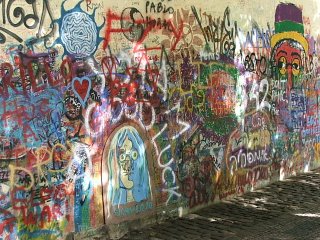 Hidden away in Prague,
ironic in the Diplomatic Quarter,
twenty scruffy yards of wall,
a bit like John himself,
haloed in fluorescent paint,
‘Give Peace a Chance’ its call.

The painters lead the secret police
and their army of tame scrubbers
a dangerous, merry dance, for
as fast as the wall could be scraped clean,
back came the yellow submarine
and the Kilroy with round specs.
No amount of frenzied rubbers
could prevent his Scouse nose
from poking where it ought not to have been.

Undercover cops wear denim now,
flaunt disreputable hairstyles.
They’ve even studied and learnt how
to appear disinterested in art.
Round the corner the US Embassy,
democracy’s bleeding heart,
bears a plaque announcing,
'Kafka lived and worked here',
and guess what?
They don’t get the joke.

Today I see that Blair admitted/denied that Iraq is a disaster. Time to get the straight jacket ready I think.