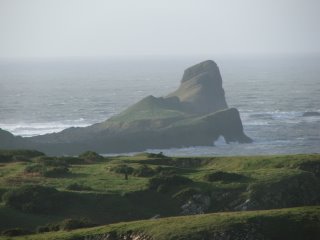 I slept in a cell, on the slopes of the sea,
Content with four winds to keep watch over me.
The wyrm slept beside me, his head in his paws,
The ribs of his green flank exposed to the shore.

He cowered in terror, as the sky screamed with rage.
The earth shook with fear, as the bars of the cage
Drew closer around him, near the end of his day,
His broken chest heaved, as his life ebbed away.

I turned in my sleep, as the East Wind took hold,
Said, 'Open your eyes before you grow old.
See your brother there, dying, while you lie at peace.
Rise up and go to him. Raise him up from his knees.'

Those eyes now possess me, in the deep of my dreams.
My silence is shattered by the ache of his screams.
His fingers are clenching in fists of white pain.
When will I ever sleep as soundly again?

The picture is of Worm's Head on the Gower Peninsula, half an hour from my home and a favourite place to walk. Named by the Vikings, 'wyrm' being their word for 'dragon'. On one occasion, I had dozed off on the grassy bank overlooking the Worm, but my 'peace' was shattered by a low flying jet practising bombing runs, coming in off the sea.