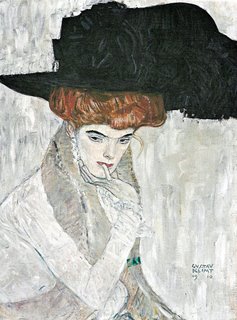 Prompted by the stinging story my eyes
Revealed, you sought to pierce my grey disguise,
Enticed by acid etching on my skin,
You longed to penetrate the pain within.
Death by proxy grips like an icy word,
A whisper not intended to be heard,
But once released on unsuspecting ears
Becomes impossible to clear.
I felt it fall away, my hopeless smile.
The clock’s hands raced pelmel round the dial.
Its restless fingers drummed the final mile.
I never understood life’s clever joke.
My innards twisted with each word you spoke,
Craving the final fiction, one last smoke.

Here's a Klimt for all you smokers. I'm looking forward to the day, not too far away when smoking is banned from all public places. A small victory, but a step in the right direction. Incidentally, I am not opposed to those who wish to commit suicide in this way, but surely it's more effective and quicker in small air-tight rooms!