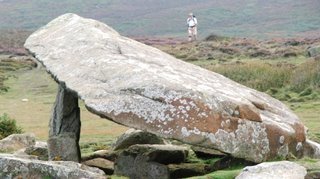 The bards have turned to plastic.
Stone suits song no more.
Our culture is elastic
When our values hit the floor.

A Gorsedd circle towered
Raised up by many hands,
By credit cards empowered
Thanks to bankers from foreign lands.

Such compromise is worth the cost
To gather every year
Where Taliesin’s words are lost
And drowned in English beer.

Last year, the National Eisteddfod was discussing replacing permanent Gorsedd stone circles with portable circles of plastic ‘stones’. They also agreed to allow alcohol on the Maes for the first time, but curiously non Welsh brewers seemed to be far more prominent! This year, I am told , they have been and gone and done it!
The picture taken on the walk yesterday is Coetan Arthur.
Coetan Arthur is a Neolithic burial chamber lying on moorland above the cliffs of St David`s Head. It dates from about 4,000BC and consists of a huge capstone supported by a side stone. Originally, the tomb would have been covered with earth. The name translates as `Arthur`s Quoit` and, according to local legend, King Arthur played a game of quoits with the tomb`s capstone. It lies to the right of the coastal path, behind rocks, just beyond the promontory of St David`s Head when approached from Whitesands Bay. Wouldn't it look so much better in plastic.