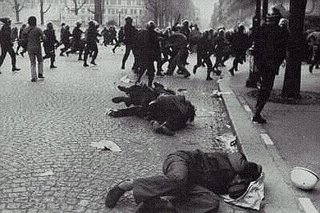 I hold your face up
to the firelight.
Flickering in your eyes
are the shadows,
hands of dying trees
that clutch and fall
for barricades.

I hold your faces up,
your weeping eyes:
flaying hands
that clutch and fling
cobblestones,
your feet,
that carried you
to the next line
where you stood
waiting for the first wave
to hammer fear
down your throats.

Hope having seen the fires
will ever carry torches
through the streets -
I see them in your eyes.

This poem was the third in the cycle of 6 previously mentioned ( see ‘The Day of the Flags’ in the August archive. ) First published as a cheap duplicated pamphlet( 6d old money ) and sold out in the midst of the demonstration against the Prince of Wales in Swansea after his Investiture. All day long I was followed by 2 members of Special Branch with nothing better to do. Hey I can do immaturity as well! The pic is an unaccredited one taken during the French May Days of '68. Gold star to the scholar who can identify the quotation in the poem.