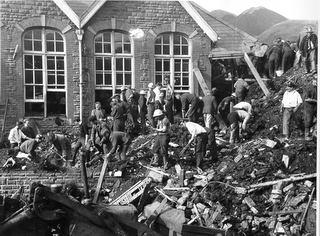 First October in West Wales the green bay
Hid under dismal unrelenting grey
Shrouds. Heads bowed, cursing rivulets that found
Weak seams and spouted spiteful underground,
Foul mouthing a prodigal sun, we turned
Our collars up and dreamt of days that burned.
An hour away the innocents slurry scorned
Walked their last walk in Aberfan, unwarned.

My garden now verges on desert, earth
Cracked, flaking, grass the colour of death,
Sky drooping, weighed down by impenetrable
Haze. Each sucking of air cauterizes.
A mirage plays where bleached walls.
Mark the well stone dry. Like fools
We beg the sky release the rain,
Yearn to feel the black ice tingle down our skin,
Ignore last night’s suffocating dreams,
Lasting memorial of a birth in pain.

This poem refers back 40 years to October 1966 when I had just arrived in Swansea for the first time as a student. I lived in a hall of residence on campus and I remember being woken up in the middle of the night, assembled in the Common Room and told that there had been a disaster. Students were being asked to stand by to assist with rescue work. We were not called out. The tragedy was in Aberfan, where a coal waste tip, undermined by days of constant rain had collapsed on Pant Glas Junior School. 146 were killed. 116 were pupils in the school.