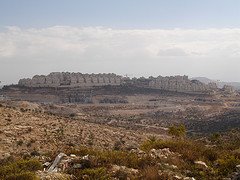 O little town of Bethlehem, how stark we see you lie!

Above tormented, restless sleep the silenced stars sneak by.

In every street is probing an everlasting light;

The hopes and fears of sixty years exposed in them tonight.

The malevolent eye,
the Mountain of the Wall,
looks down
blanks out the sky.

Each street. each square
is viewed through gunsights
but, even the sightless can see
our tables all laid bare.

Up there sprinklers ply
across lush lawns.
Down here the taps
gasp dry.

Soak up the cooling dew
before the sun could scour
the slopes of yesterday.
Would that you

Had seen the tiny droplets form
on every blade of grass
a paradise of twinkling rainbow light
with the coming of the warm.

But no, that would have made of me a liar.
To understand me now, much better
You should see my tears form once more
on sullen coils of razor wire.

The title is taken from a traditional Irish tune. I was taken to task for perverting the hymn in the first stanza, but I still feel that the Christmas card image needs to confront the reality of a town that is dominated by a fortified Israeli settlement and whose water supply is controlled by armed zealots. Just look at the picture. How would you feel if this monstrosity grew up next to your town?