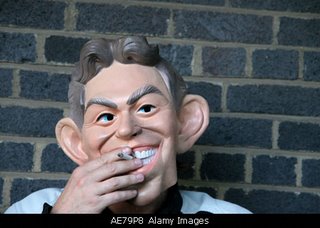 The man they called Matilda
Went on to rule the land.
The more he lied, he found
The more things went to plan.
The trick was in his easy grin.
The voters had no choice,
When he looked them in the eye,
The sincerest tremble in his voice.
It mattered little what he said.
He delivered lies with style.
The more his pals grew rich,
The wider was his smile.
Schools trained for unemployment,
Hospitals were staffed by the sick,
The trains all ran backwards,
Wise men had no time to think, '
Planes flew round in circles,
Seas turned from blue to black,
The innocent trembled in their beds,
Awaiting the terrorist attack.
Others paid his blood price.
Whilst Matilda slept at ease,
They sweated in the desert,
Deprived of any peace.
No matter what the issue,
No matter what you mention,
Matilda comes up smiling
And we get PM tension.

When the Bliar attended Fettes College he was given the nickname 'Matilda' by fellow pupils after the Hilaire Belloc character who 'lied and lied and lied'. How perceptive schoolkids are! How little things have changed! I am considering doing a major re-write of this piece as I think it is far too soft on him, so watch out for Matilda II in the near future.
Posted by REJ GOCH at 2:14 AM