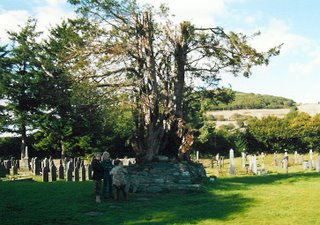 Some time on the tattered, shifting fringes
Of memory, your first words
Gave tongue on the west wind,
Swept around lichen smothered stone,
Searched out crannies to take hold.
Some syllables foundered, swallowed
Without a trace, some etched
Behind a wrinkled face.

Then, the king’s grave robbers,
Book burners, tax collectors,
Spin doctors and thugs
Made their mark on history.

Words buried in scholarly vaults,
Suffocated in the ensuing
Avalanche of print
Straining for release.

Skilful hands engraved the slate
Near the shattered yew
Where rumours say you lie
Wearing a wry smile no doubt
Aware that when the hydrochloric rain
Has written its verse,
You’ll still compose
In shifting cloud, the rush
Of spray over black stone,
Sharp intakes of breath,
One man whose wit and humour
Defeated death.

This poem is dedicated to two Dafydds, Dafydd Ap Gwilym and Dafydd Johnston, Professor of Welsh at Swansea University. The picture shows what is left of the yew tree beneath which the medieval poet is reputed to be buried.
Posted by REJ GOCH at 4:04 AM