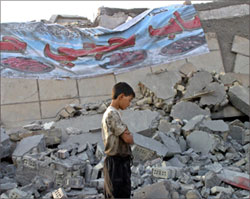 He clambers in the hollowed hand
Of crumbling masonry,
Reaching out toward the ever green land.
He sings tunelessly to the rattle of stones
On armour plate, the splinter of bones
Of glass, the diesel beat,
Rhythm of fleeing feet.

He can see olive groves, abandoned fields of dust
And there beyond,stars of seas
Wink invitations that must
Be answered by this journey,
Weaving through the burnt out cars,
Slipping under wire that slices and scars,
Towards the silent unseen lines
Buried beneath the surface of our minds,
Until the strayaway meets the first landmine.

The title is taken from a traditional Irish folk tune. The setting is the Gaza Strip. The photo was taken in Jenin. Ken Loach has been severely criticised for his film 'The Wind Shakes the Barley' and the way in which he draws parallels between Irish history and current events in the Middle East, but it is no co-incidence that wherever the British Empire left its footprint, the legacy has been conflict, misery and suffering.
Posted by REJ GOCH at 4:01 AM