Jenin ( The birth of a suicide bomber ) 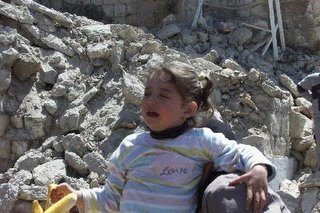 The writing is on the wall. Her finger
Directs your gaze to the childlike scrawl. There
On the pock marked plaster, thoughtfully she
Skirted many bullet holes to make her point.
Deaf to the tanks' tread, deaf to orders barked
In alien tongues, hearing only the cries
Of blooded children, or the wailing of
Their mourners, she voiced her deadly prayer.

Mother! Let me die just like an angel!
May death consume me like a flame once weak
In darkness, but now alive and blazing
Round the heads of those who hold me fast here,
Stripping bare their minds, until they too sear
Stateless, without hope, breathless with my fear.

This poem comes from watching an edition of Newsnight. They were interviewing a Palestinian mother. Her 12 year old daughter had carefully written a letter to Yasser Arafat on a wall in their shattered home. She was volunteering to become a suicide bomber. How can we hope to understand the despair that produces such a child? One thing is for sure, unless we begin to understand that when a people are deprived of their homes, their living, when they believe that no one cares about their deaths and the destruction of all that they know, then there will be no end to the carnage.

The poem is also special to me, because it formed my first connection with the great jazz saxophonist, Gilad Atzmon. When I gave it to him after a gig in Bristol, he said, "Ah, you know about my politics!" I didn't then, but I surely do now and I am richer for it.
Posted by REJ GOCH at 3:53 AM