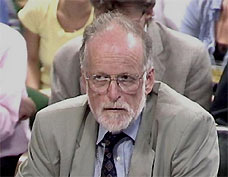 Practised priests of fiendish spin,
Each with the morals of a louse,
Combined to do the kind professor in.

They pause from massacring grouse,
Wearing smiles, both forced and thin,
To hear a solemn statement in the House.

Slashed his wrists, fearing that he’d win,
This gentle man, as timid as a mouse,
Crushed by the lies of a mandarin.

Fine sentiments their speeches rouse,
The Commons join in unctuous din,
Regardless of the whys and hows.

The civil servant’s fate to lose his head,
While ministers sleep sound in bed.

"Alarming new questions about the death of Iraq weapons inspector David Kelly have been raised as a major investigation cast doubt on the official verdict that he committed suicide.
The inquiry by campaigning MP Norman Baker will spark renewed speculation about how the Government's leading expert on weapons of mass destruction was found dead in a field in Oxfordshire three years ago. " Daily Mail. I'm not given to quoting from this right wing rag, but when even they campaign relentlessly on this big lie, doesn't that say something about the depths to which this government and the spineless collection of Labour MPs that sustain it have sunk.