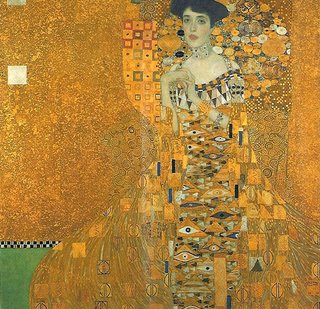 Down coruscating slopes hot lava flows
Levelling lines wherever it should chose
To uncoil its ravenous molten fold.
Streams of blackened ants with little to lose
Turn towards the fire, follow where it goes,
In certain hope of turning dross to gold.
One instant to suffer the ash’s drizzles
For transformation as the skin sizzles.

Safe in cool galleries, we gawp and stare,
Struck silent by the new found power there,
Serene beneath the glare of myriad eyes,
She stands aloof, porcelain skin like ice,
While all around her, fresh paint is burning.
Once indifferent, our minds are turning.

Two years ago, after I had written this poem, I went on a 'pilgrimage' to Vienna to see Klimt's work first hand. There in the Belvedere I was confronted by this massive painting, at least 6' by 6', displayed on its own. No reproduction could ever do it justice. The effect of the gold leaf was such that it burned off the wall and I was especially pleased with the imagery in the poem in that context.

Just a month ago, the long running battle between the Austrian authorities and the surviving members of the family that owned the painting prior to fleeing the country to escape the Nazis came to an end. Adele's portrait was sent to America and then sold on for, I believe £68 million, to the Guggenheim Institute.

I have mixed feelings about this. I hate the idea of the fascists seizing art treasures, but I also hate the idea of any individual profiting to such an obscene scale from any work of art. Klimt's paintings belong in Vienna not in some American mausoleum.